3D Screening of the 7th StoryConcert has started!

As we reported a few days ago, the earthquake/tsunami/nuclear crisis didn’t affect the scheduled screenings of the 7th StoryConcert “Märchen” in 3D at TOHO Cinemas.

Here is a brief report of the movie with data taken from Twitter and blogs!

It says that the release of the 7th Story Concert “Märchen” ~Those dazzling days in which you are smiling now…~ has been decided. It also says that details will appear in the Official Website ‘sometime soon’.

Let’s hope it will be next week!

Sound Horizon was featured in the Oricon BiZ website, as part of the section ‘BiZ Recommends’. Also, the first issue of the new FOOL’S MATE spin-off magazine Anison Mate featured an interview to Revo. 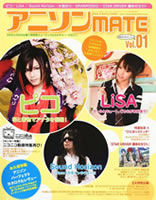 Previous postRevo's post about the earthquake in Japan Next postThe trailer for the 7th StoryConcert "Märchen" is UP!