Finally, after being cancelled due to the tragedy of the Great Tohoku Earthquake and Tsunami that hit Japan last March, the Sound Horizon Cafe 2001 präsentiert “Märchen” opens today at the TV Asahi umu space (Roppongi, Tokyo).

Entrance (?) of the Sound Horizon Cafe

Entrance of the Sound Horizon Cafe

Elize couldn’t miss this one

I wonder if Mr. Bread and Mr. Apple are also there.

Last Tuesday was the 7th Anniversary of the release of Elysion ~ Prelude to Paradise, the first album launched by Sound Horizon from a Major Label. The words “Sanhora 7th Anniversary” (in Japanese, サンホラ7周年) were Trending Topic in Twitter for a few hours, which is crazazy. 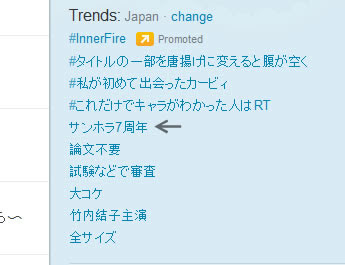 By the way, ‘revive’ also became trending topic during a very short time in Twitter when the Opening Theme of the Live Tour was first released from the official website.

Kira Laurant, overall manager of the All Laurant Project, confirmed that the packages with the Revive Posters, the books with all the messages and the CDs with the Revive Chorus were already sent to each and every one of the 31 members of the Revival Tour (yes! 1 present per person) and all of them were delivered safely.

However, due to some problems, the final version of the Revive Chorus, featuring the voices of all Laurants, hasn’t been posted on YouTube or NicoNico yet 🙁 But it will be eventually!