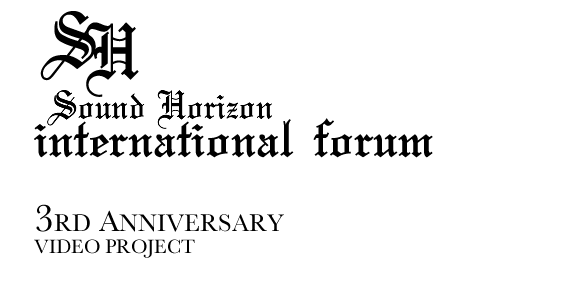 The Sound Horizon International Forum has just turned 3. When the boards opened, the 2009 Live Tour Triumph DVD had just come out, and that was the big thing of the moment. Since then, we’ve seen Sound Horizon go through differents stages. Tours, singles, Story CDs, changes… Now, Sound Horizon is in a rest and Revo has recently started a tie-up project called Linked Horizon.

It’s definitely been three big years! And we’ve shared all these moments in the forum. Hatsune Miku taking part in an album, the announcement of the Revival Tour, the first impressions of Ido e itaru Mori e itaru Ido and Märchen…

It’s very likely that you’ve shared at least one of these moments with all of us. These three years have seen the creation of a steady overseas fanbase for Sound Horizon, and now we want to take a short look at the past to head our next three years. White Crow and the International Forum is holding a video project in which all the forum members can take part, and we really hope you do!

More or less the same way we did for the SH 6th Anniversary project, we’ll make a collab video with images of all the users. All the videos will revolve around the same topic:

“What are the best memories I have from these 3 years in the forum?”

Does this mean you need to have been around for the whole 3 years? No! Very few of us have, indeed. Following that line, we want you to talk about the forum from your point of view:

A part from these guidelines, the content is totally free.

You don’t need to enter the project previously before sending your video. Just follow the instructions below!

You have one month to submit the video. This means that the deadline for submissions is January 31st, 2013. Be sure to not miss it!

The video will be released shortly after the deadline is over. The expected release is February 2nd, 2013.

As written below, the video should  be under 50 seconds, and we might cut a bit of it or split it in parts throughout the final montage. You can be with other people in the video if you want to!

Use your own language, or any other you feel like. If you use a language that is not English, though, please provide a written translation in English!

AND IN CASE YOU MISSED IT

The mail to which you have to send the video or link with the video is: shk.fansite@gmail.com!

Don’t miss this chance of becoming one with the rest of the forum members!