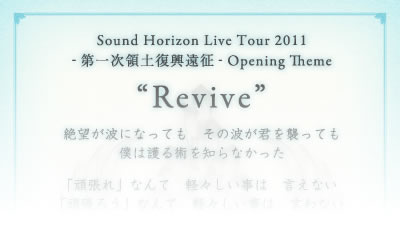 This year’s live tour, entitled “Sound Horizon Live Tour 2011 – 1st Invasion of Territorial Reconstruction”, will have its own special opening theme, and its lyrics have been made from pieces of over a 1000 people’s submissions, as it had been requested from the official website.

As we all know, this year’s tour will be aimed to the support of Japan’s disaster relief, due to the terrible series of catastrophes that struck last March. This Opening Theme, titled “Revive”, sings of hope and brotherhood among citizens in order to overcome the disaster.

Do you like it? There’s no specific info about the complete cast that took part in the song, but we can assume that it includes the whole cast that participates in the Live tour.

After the project for the 100 Laurant Anthem Chorus ended successfully, Gukko showed interest in our rendition of the National Anthem and asked me about how did the idea of this project came out, how did we organized it, etc etc.

Then, he made a post at the Japanese SH Fansite, Chronica Note, in which he introduces this project to the Japanese fandom. It may seem rather trivial to many of you, but having a post at the Japanase SH Fansite dedicated exclusively to praising and acknowledging the overseas Laurants and our activity is a great thing for us, since it basically means that people from Japan will start to be more aware of us, and hopefully Sound Horizon itself will do so as well 🙂

On the occasion of the King’s Birthday a few days ago, a chorus consisting 100 Laurants from overseas was formed as a present!

As a project that rose from the Fansite of the overseas Laurants and its community, lots of people starting from Elica de Laurant from Canada and Mr.Artigas (a.k.a Kurobara) from Barcelona sang an english version of the SHK Anthem.
Then, gathering all the voices in one, it became a huge chorus of 100 people.

Normally, we rarely are aware of overseas fans existing… Or at least I have never imagined that, but when I come to think that there are Laurants beyond the far horizon who love listening Sound Horizon’s songs as much as we all do, who tackle all those riddles inside the lyrics with a Japanese dictionary on one hand, it literally warms my heart.

The JASRAC guys will be grabbing their heads at this, but let’s make an exception this time

This is the video of the chorus.

We also had our project meetings here in Japan on June 19th, and we also had chorus and videoletters, but thinking that overseas, Laurants also cellebrate Revo’s birthday from their countries…!

(and then he adds a screenshot of my tweets, in which I explained him the basis of the project and how we managed to do it.)

Yay! A 1,000,000 thanks to Gukko from Chronica Note, and Elica de Laurant, who brought this project in the first place! 😀

Clap for Japan! We DO say Ganbare! →