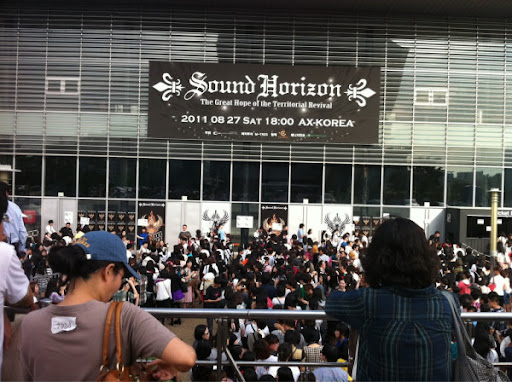 Last Sunday (August 27th) was Sound Horizon’s first LIVE concert in Korea! This is SH’s first show outside Japan, which means nothing but TERRITORIAL EXPANSION!

Sound Horizon started releasing Korean licensed editions of their albums in late 2009 (Moira being the first in November 2009) and opened the Korean fanclub in June 2010.

This is the setslit of the concert:

The singers attending in this concert were: Revo (as Hiver, and then as Revo himself), KAORI (as Violette), Joelle (as Elisabeth von Wettin), Mikuni Shimokawa (as Nobara Hime), MIKI (as Therese von Ludowig and Alte-Rose), YUUKI (as Hortense).

During the final MC, Revo said some words in Korean: Dangsindeul eun naui gugmin iya (당신들은 나의 국민이야) which means “All of you are my citizens!”. However, there was a Japanase-Korean interpreter during the MC’s so that the audience could understand Revo’s (and the other members’) words. At one point, KAORI was moved into tears by the emotion (didn’t this happen as well during the last MC of the Triumph of 2nd Territorial Expansion?).

Unlike Japanese Laurants, it was reported that Korean Laurants cheered and chorused really loud!