Last week, it was announced by the Imperial Household Agency that Revo had personally donated a total amount of JPY 10,000,000 (about 120,000 US$) from the revenue of the Sound Horizon 2011 Live Tour to the Japanese Red Cross, in order to contriubte to the Earthquake and Tsunami relief. 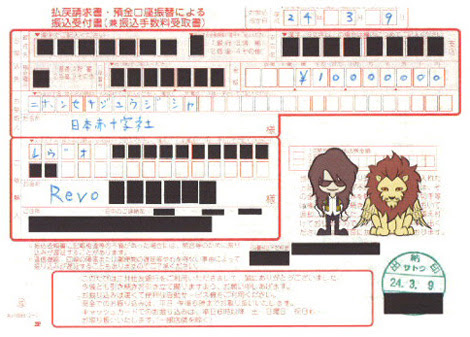 Actually, Sound Horizon’s 2011 Live Tour was fittingly tagged “The Great Hope of the Territorial Revival” and it was said that a portion of the revenue would go straight to the Japanese Red Cross. The amount of this portion, though, hadn’t been announced until now.

This is, hands down, one praiseworthy deed to say the least. Glory to the Sound Horizon Kingdom!